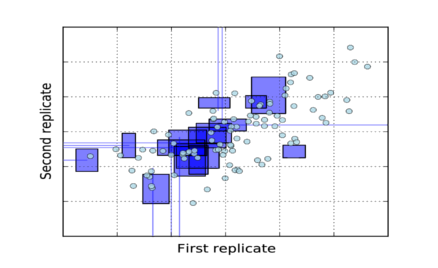 Censored data arise when a value of interest, such as the concentration of a chemical in a specimen, lies within a known set of values, but the specific value is not known. For example, assays used in environmental toxicology typically have a lower limit of detection. The measured concentration of the compound of interest will be censored if the true concentration lies below the detection limit. Most standard statistical tools cannot accommodate all possible types of censored data. Motivated by joint work with toxicology researchers in the Netherlands, CSCAR graduate student research assistant Yanming Li, along with CSCAR Associate Director Brenda Gillespie and Director Kerby Shedden are developing an R package that will perform likelihood-based correlation analysis on all types of censored data. Likelihood-based inference for such problems has long been known to perform well in terms of its statistical properties, but only recently became computationally feasible for routine use.